We trekked to the Performance Journal archives at the Movement Research 2nd Avenue office. We looked specifically for writings from the earliest issues and in this "From the Archives" entry you can find two writings from MRPJ#1. As we dug through the archives to select this writing, we were struck by how well the ideas have held up through time. In great circularity and tradition, we as a Movement Research community have kept to our core investigations, our politics, and the actions of our bodies alone and most importantly, together.  In the last 25 years, circumstances have shifted a million times and the MRPJ upholds the steadfast relevance of performance through all of those shifts and changes. 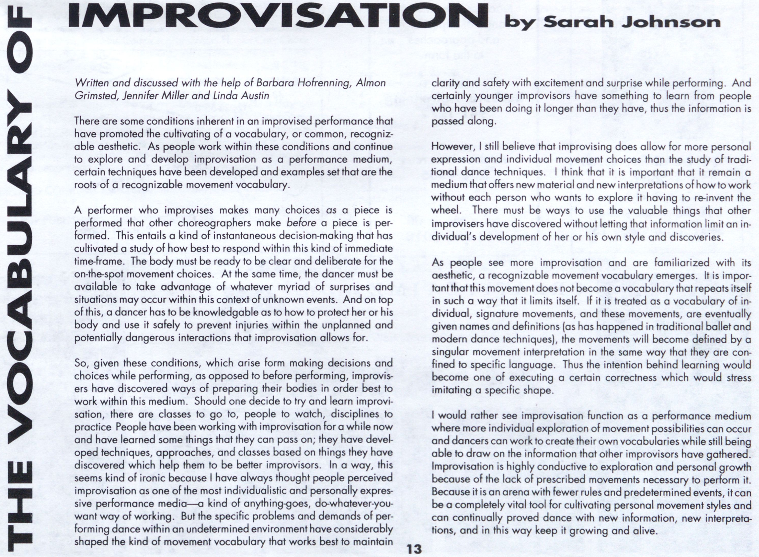 The Vocabulary of Improvisation by Sarah Johnson

Written and discussed with the help of Barbara Hofrenning, Almon Grimsted, Jennifer Miller and Linda Austin.

There are some conditions inherent in an improvised performance that have promoted the cultivating of a vocabulary, or common, recognizable aesthetic. As people work within these conditions and continue to explore and develop improvisation as a performance medium, certain techniques have been developed and examples set that are the roots of a recognizable movement vocabulary. A performer who improvises makes many choices as a piece is performed that other choreographers make before a piece is performed. This entails a kind of instantaneous decision-making that has cultivated a study of how best to respond within this kind of immediate time-frame. The body must be ready to be clear and deliberate for the on-the-spot movement choices. At the same time, the dancer must be available to take advantage of whatever myriad of surprises and situations may occur within this context of unknown events. And on top of this, a dancer has to be knowledgeable as to how to protect her or his body and use it safely to prevent injuries within the unplanned and potentially dangerous interactions that improvisation allows for. So, given these conditions, which arise from making decisions and choices while performing, as opposed to before performing, improvisers have discovered ways of preparing their bodies in order best to work within this medium. Should one decide to try and learn improvisation, there are classes to go to, people to watch, disciplines to practice. People have been working with improvisation for a while now and have learned some things that they can pass on; they have developed techniques, approaches, and classes based on things they have discovered which help them to be better improvisors. In a way, this seems kind of ironic because I have always thought people perceived improvisation as one of the most individualistic and personally expressive performance media—a kind of anything-goes, do-whatever-you want way of working. But the specific problems and demands of performing dance within an undetermined environment have considerably shaped the kind of movement vocabulary that works best to maintain clarity and safety with excitement and surprise while performing. And certainly younger improvisors have something to learn from people who have been doing it longer than they have, thus the information is passed along. However, I still believe that improvising does allow for more personal expression and individual movement choices than the study of traditional dance techniques. I think that it is important that it remain a medium that offers new material and new interpretations of how to work without each person who wants to explore it having to re-invent the wheel. There must be ways to use the valuable things that other improvisers have discovered without letting that information limit an individual's development of her or his own style and discoveries. As people see more improvisation and are familiarized with its aesthetic, a recognizable movement vocabulary emerges. It is important that this movement does not become a vocabulary that repeats itself in such a way that it limits itself. If it is treated as a vocabulary of individual, signature movements, and these movements, are eventually given names and definitions (as has happened in traditional ballet and modern dance techniques), the movements will become defined by a singular movement interpretation in the same way that they are confined to specific language. Thus the intention behind learning would become one of executing a certain correctness which would stress imitating a specific shape. I would rather see improvisation function as a performance medium where more individual exploration of movement possibilities can occur and dancers can work to create their own vocabularies while still being able to draw on the information that other improvisers have gathered. Improvisation is highly conducive to exploration and personal growth because of the lack of prescribed movements necessary to perform it. Because it is an arena with fewer rules and predetermined events, it can be a completely vital tool for cultivating personal movement styles and can continually proved dance with new information, new interpretations, and in this way keep it growing and alive. 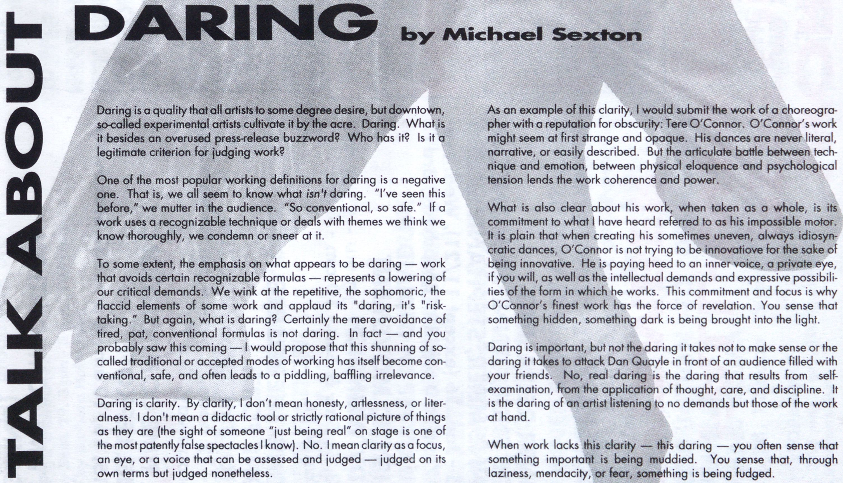 Talk about Daring by Michael Sexton

Daring is a quality that all artists to some degree desire, but downtown, so-called experimental artists cultivate it by the acre. Daring. What is it besides an overused press-release buzzword? Who has it? Is it a legitimate criterion for judging work? One of the most popular working definitions for daring is a negative one. That is, we all seem to know what isn't daring. "I've seen this before," we mutter in the audience. "So conventional, so safe." If a work uses a recognizable technique or deals with themes we think we know thoroughly, we condemn or sneer at it. To some extent, the emphasis on what appears to be daring — work that avoids certain recognizable formulas — represents a lowering of our critical demands. We wink at the repetitive, the sophomoric, the flaccid elements of some work and applaud its "daring, it's "risk taking." But again, what is daring? Certainly the mere avoidance of tired, pat, conventional formulas is not daring. In fact — and you probably saw this coming — I would propose that this shunning of so called traditional or accepted modes of working has itself become conventional, safe, and often leads to a piddling, baffling irrelevance. Daring is clarity. By clarity, I don't mean honesty, artlessness, or literalness. I don't mean a didactic tool or strictly rational picture of things as they are (the sight of someone "just being real" on stage is one of the most patently false spectacles I know). No. I mean clarity as a focus, an eye, or a voice that can be assessed and judged — judged on its own terms but judged nonetheless.

As an example of this clarity, I would submit the work of a choreographer with a reputation for obscurity: Tere O'Connor. O'Connor's work might seem at first strange and opaque. His dances are never literal, narrative, or easily described. But the articulate battle between technique and emotion, between physical eloquence and psychological tension lends the work coherence and power. What is also clear about his work, when taken as a whole, is its commitment to what I have heard referred to as his impossible motor. It is plain that when creating his sometimes uneven, always idiosyncratic dances, O'Connor is not trying to be innovative for the sake of being innovative. He is paying heed to an inner voice, a private eye, if you will, as well as the intellectual demands and expressive possibilities of the form in which he works. This commitment and focus is why O'Connor's finest work has the force of revelation. You sense that something hidden, something dark is being brought into the light. Daring is important, but not the daring it takes not to make sense or the daring it takes to attack Dan Quayle in front of an audience filled with your friends. No, real daring is the daring that results from self examination, from the application of thought, care, and discipline. It is the daring of an artist listening to no demands but those of the work at hand. When work lacks this clarity — this daring — you often sense that something important is being muddied. You sense that, through laziness, mendacity, or fear, something is being fudged.