Song Tucker: this is the work of thawing

Working from a place of deep lyricism and exceptional craft Song Tucker's articulation of the poetics of identity introduces the reader to her singular voice and the necessary reverberations of that voice. Tucker engages in the performative through her experimental exposition of time and ontology. 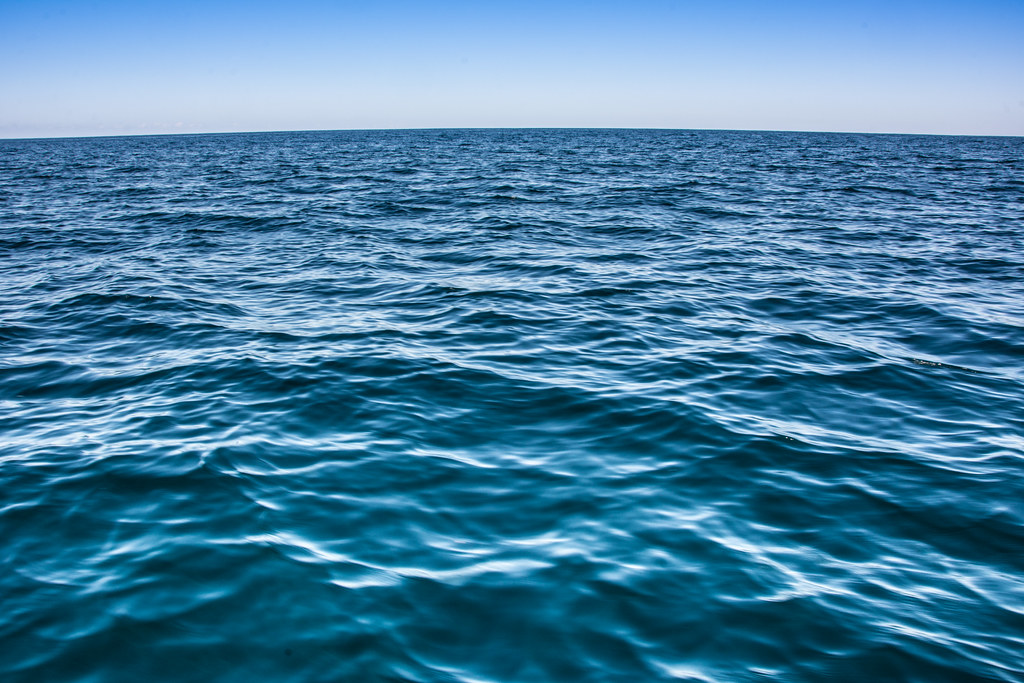 I am sinking and have always been.

I cannot remember reaching the surface without drowning.

What lies in the water, is the unfathomable love for the unknown, wading the tides is as in tangible as catching air. The moments are undeniably ephemeral, and yet there is truth in that temporality. There is trust in that washing.

Maybe I have always been comforted in the newness.

Maybe all we know is new, washed away, washed upon newness. Our bodies cling to the shackles of discovery like magnets, dependent familiar with the disruptive taste of metal.

And yet the water dissolves the iron,
I/we laid under the rust
Falling into pits of
I don’t know yet, we are constantly disturbed.

I think I saw another head in the water,
Maybe she’ll learn to walk on the abyss
What do I look like taken apart
Where do my parts flow?

I think the water took my feet away.

“What does it mean to defend the dead? It means work” - Christina Sharpe

The waves are loudest at night.

Tides are pulled by the moon’s progression, perhaps you can catch time in reflection of her faces.

Perhaps they will match my own.

Sometimes, when my throat gets choked, and I am gasping for the air that seems to play the game of belligerent tag, and my limbs feel as if they pulled and tugged so violently that I cannot even attempt to stand on my two feet,

I wonder how many times I have died, and in that process of recovery how I am still dying,

of thirst maybe in the arms of kendrick’s melodies,

or with noname when she calls on africa,

and Biggie when he became his own prophet. 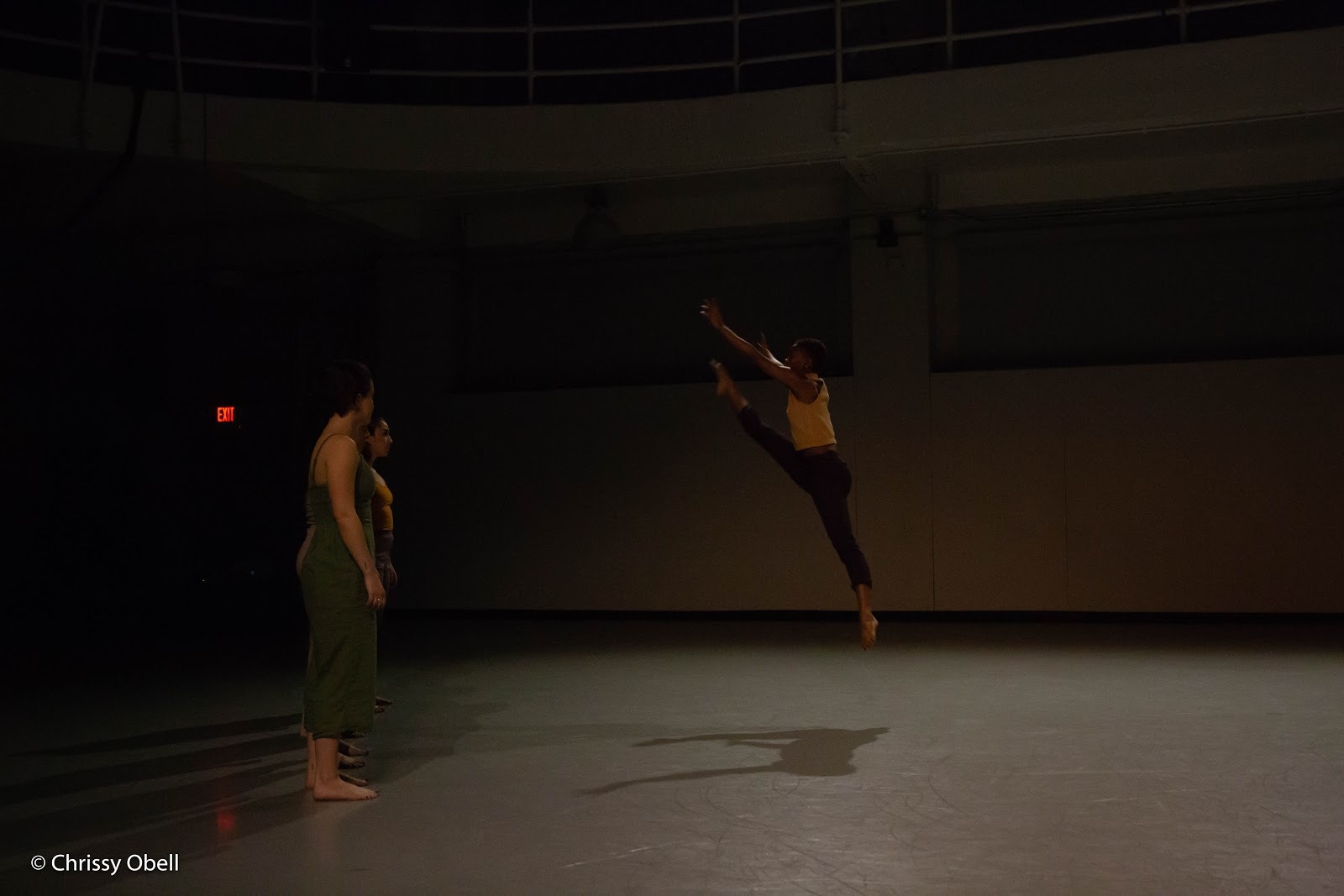 ID: A black girl with a bald haircut jumping off the ground with arms reaching toward her right leg split in front of her, facing left where two white dancers watch the black dancer caught in mid air within a soft spotlight in the upstage area. The full picture has been darkened and edited to a washed blue gray color, from the grey and white of the dance studio.

“The slavebody was dead, wasn’t it? The black body was alive, wasn’t it?”- Toni Morrison

It’s the question that haunts me. All of those letters combined, heightened with a question mark all float together in an err of confusion swimming about me. Was I dead or alive? My black body has experienced glimpses of aliveness. I felt that it used to cycle through me, membrances of joy and celebration would cling to my sides hoping to be held and possibly recycled again.

Glimpses of aliveness look like hugs from grandmommy, the first lick of ice cream after a furious chase after an ice cream truck, knees scraping the pavement when I fell outside of the jump rope to prove that I can hang around tough older girls, congratulations after first dance recital, stating my first speech at the black history club assembly, laughing until my sides hurt on the stairs of Hamilton Hall with people whose skin tones rubbed up against mine so well, if you were to plant us into garden you wouldn’t be able to tell who was the soil, bark, or the flowers.

My black body has also experienced floods of death. Floods and death look like, getting a paper returned with an F for plagiarism out of the belief that I could not possibly write as good as I did because I simply wasn’t capable, being placed in pink tights to match everyone else in the room but myself, being slapped on my hips because they were too wide in an audition, being molested by the eyes of white man in the restaurant business, being called respectable and kind by my landlord as opposed to???, watching a police officer smile after being found not guilty of murder, being asked to speak before my voice can even unlock as a means to alleviate discomfort from those whose only option in life has been comfort, hearing the sound of struggle in black person’s dying voice reverberating around social media.

I wonder how many times my slave body gets silenced, sweaty palms rushing to clasp fingers on top of the cracked lips of those behind me. How many times does the memory resurface only to get pushed down and drown again, eyes and ears bloated in oceans of death. How many times have I died right in front of you, choking on the chains swooshing low under the disturbances of your inherent aggressions?

What if the slave bodies could sing? I imagine the pitch would scratch my ears at first, the first cracks clearing dusted throat pipes still clinging to the conditioned silences of generations before. I imagine they would go duck their heads back into the water just for a second, not too deep or they might drown, but with noses slightly hovering the subtle laps of sea, mouth consuming moisture, warming up the throat until something so velvety and guttural would escape. Silk would fall in ruffles down the air, velvet still floating, making its path of warmth and clarity, lusciously untainted. Hums, ad-libs, and other bellows of symphony would start to do the work of reveal, excavating time and space of dismissive narratives. They would start to get painted in with color, so attentive, I believe I could finally reach and kiss them they way they needed to be held before they had to ever get used to lifeless holds of fickle promises, drawn up in what Toni Morrison offers as “phantom histories.”

I woke up tasting revolution on my breath

I’ve been hugging and kissing her for weeks now

Today she allowed me to taste

Direct enough for me to hear all of the drops

We caressed each other between the sheets

But she was already engulfing

Slowly enclosing on my mouth

Gripping my knees and shoulders

Tightening against my ribs

You must explode, she whispered

Today I will I keep savoring the taste

Tomorrow I will prepare a whole meal

When the baton hits the back of my throat

And my tongue escapes my mouth

BURN THE SHIT DOWN

A close up of the open ocean taken from a low perspective, catching a small piece of a clear blue sky where the water meets the horizon near the top of the frame. The colors and definition of the water deepens in imaging, transforming from a rich blue color to a teal towards the bottom of the page.

Song Tucker is a Philadelphia based movement artist in her fourth year at University of the Arts. She has produced three distinctive works to precede a lineage of production in honor of a multiplicito...
Read More