LYDIA BELL: We are in your studio in Bushwick and we just looked at some ephemera related to Cherie Dre.

SACHA YANOW: Yes. A wing, some feathers, costumes, a chair. Some rubble from the Concord ruins [a hotel in the Sullivan County Catskills].

LB: It’s fitting to look at these visual, sculptural elements because I wanted to ask you about the moment we started talking about Cherie Dre, about a year ago. You had recently done an installation with visual elements at the Cooley Gallery at Reed College. Can you talk about the form that the piece has ended up taking? I’m interested in your relationship to the different media that you’ve used as resources throughout the process.

SY: The piece was in a very early conceptual place when the Cooley invited me to make an installation. I had never made something before where my body wasn’t present and I was trying to imagine how physical ephemera or other objects could create some sort of psychological environment. All the objects, whether fantastical or artifacts from a specific period of time, were imbued with a lot of emotional meaning. The visual imagery from the marketing materials of the hotels back in the 50s, photos of my family from that time, photos of the physical landscape, the wildflowers—all of these things have been hugely influential to the story itself. I tried to perform inside the installation for the opening and it didn’t work for me—the space and the objects were already performing. I’ve always imagined the fullest incarnation of this work to be a live performance and so it’s been a question—what role do any of these objects actually play? What’s the difference between an installation performing something and a set piece? And what happens to the object in that situation? And my relationship to it? I have had conversations about how to incorporate these objects into the design of the show with my video collaborator, Sasha Wortzel, and the set designer Cate McCrea. As we speak we are finishing the show—some of the objects may end up in the piece and some of them will just be referenced.

LB: One of the things I’ve been really excited about in being a witness to your process over the past year has been the way you’ve brought your collaborators in and created a community around the work. Can you talk about what you value in collaboration, and what values you are cultivating?

SY: There’s only so much I can do with my solo body. This particular story, both the familial aspect of it and also the social history of it, called for a more expanded vision. It was really exciting to see what people’s entry points were for the piece, and how it translated across different cultural backgrounds or family experiences; and that everyone had a deep connection to the ideas. The people who have been with me since the early stages of this work are Melissa Levin, who is helping produce the project, and Morgan Bassichis, who is also solo performer—we often act as outside eyes for each other’s work. Other collaborators entered the work in the final six months. Caitlin Sullivan, who is the director, helped me shape the story so that it is told in the clearest way. Faye Driscoll, who is a friend of mine whose work I love, is helping me find a movement vocabulary for these two states of self that I move between in the show. And then there is Holland [Andrews], who is somebody I’ve met more recently, I think their work is so powerful and I loved what I’ve seen of their collaborations with other artists. Holland is creating a beautiful and haunting soundscape, including songs by the Yiddish pop sisters, the Barry Sisters, who were very popular in the 50s. I’ve also been having a great dialogue with Sasha Wortzel. I love her video work so much, especially the way she captures physical landscapes simply and beautifully, and the feeling of the social histories layered in them. I had spent all this time in the ruins of the hotels upstate by myself trying to document them as best I could, but it was so incredible to get to witness and honor those sites with Sasha. 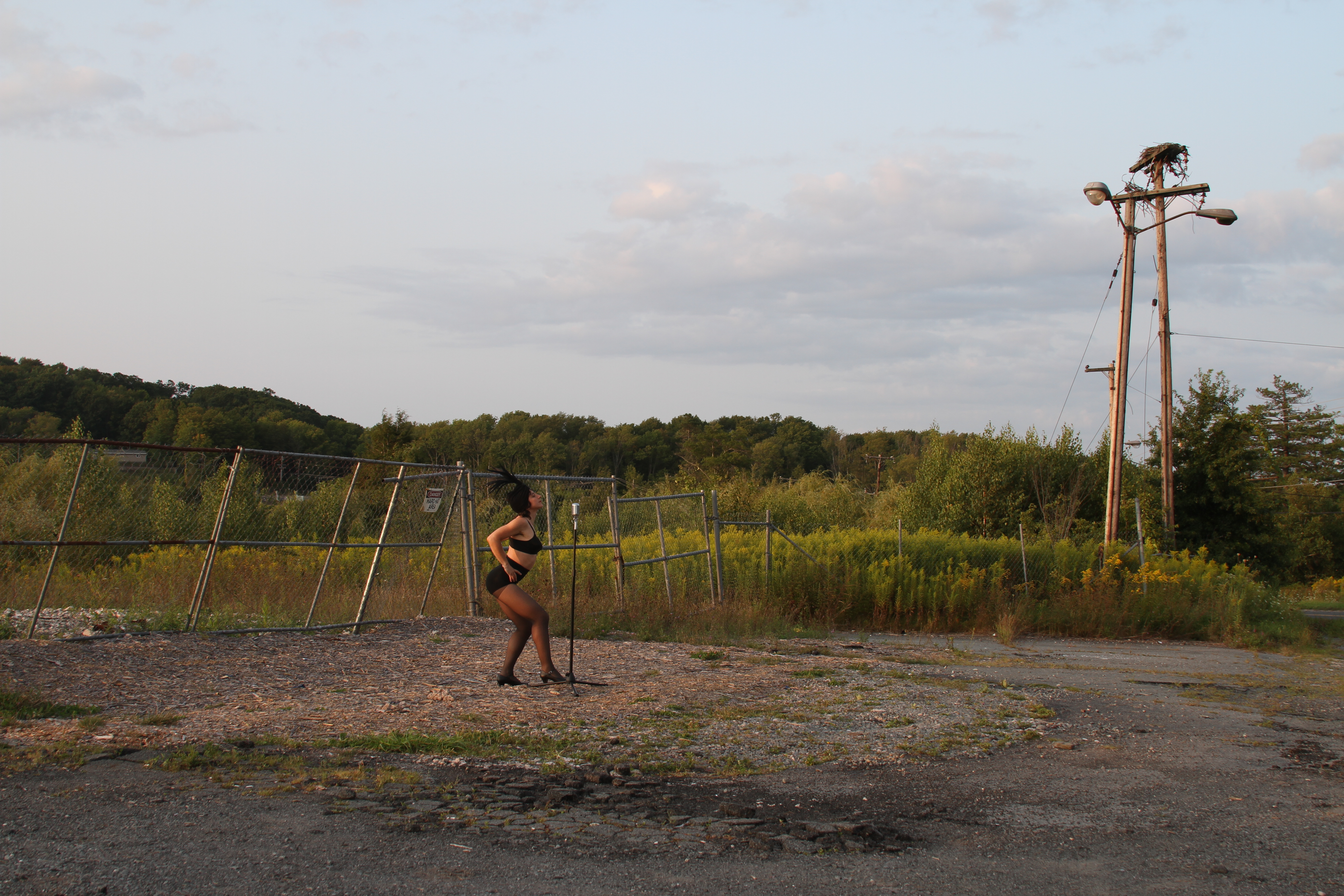 LB: I’m glad you brought up site. That was definitely something I was thinking about when we commissioned Cherie Dre—thinking about how that work would read in an East Village context, thinking about the connection between the Yiddish theaters on Second Avenue in the early 20th century and Borscht Belt history. And thinking about the layers of performance history at Danspace and St. Mark’s Church, how women's stories are told, and how the process of looking back at historical moments is itself inherently political.

The other thing I want to highlight is your expanded sense of movement: movement as social movement and change. This feels relevant and important to think about in relationship to other kinds of choreographic work.

SY: You are identifying something that I feel really connected to and why I’m excited about Danspace’s programming. I have always felt at home in the dance community, or communities, because of this open and expanded sense of movement. I’m not a choreographer but movement feels primary to me. It comes before the text. There is so much in this show that resonates with this idea of an expanded sense of movement. I’m thinking about migration patterns—how ancestors migrated to this country and the migration of Ashkenazi Jews from the Bronx and the Lower East Side to the mountains upstate. I was thinking about birds and birds migrating. I was having this dialogue with my costume designer [Ásta Hostetter], who is amazing, about what women during my grandmother’s time were probably costumed in, and the flow of—or lack of—movement ability. This is for real. Like, a girdle is not a joke.

LB: And that movement restriction is connected to the voice and a sense of empowerment as well. If we can’t breathe properly from our diaphragm, then that is literally affecting our voice, how we’re heard, and how we project.

SY: But weirdly the complex part is that when I have tried to perform with that constriction, I often feel freer or more connected to a sense of my grandmother or the way she could move, or figured out how to move. 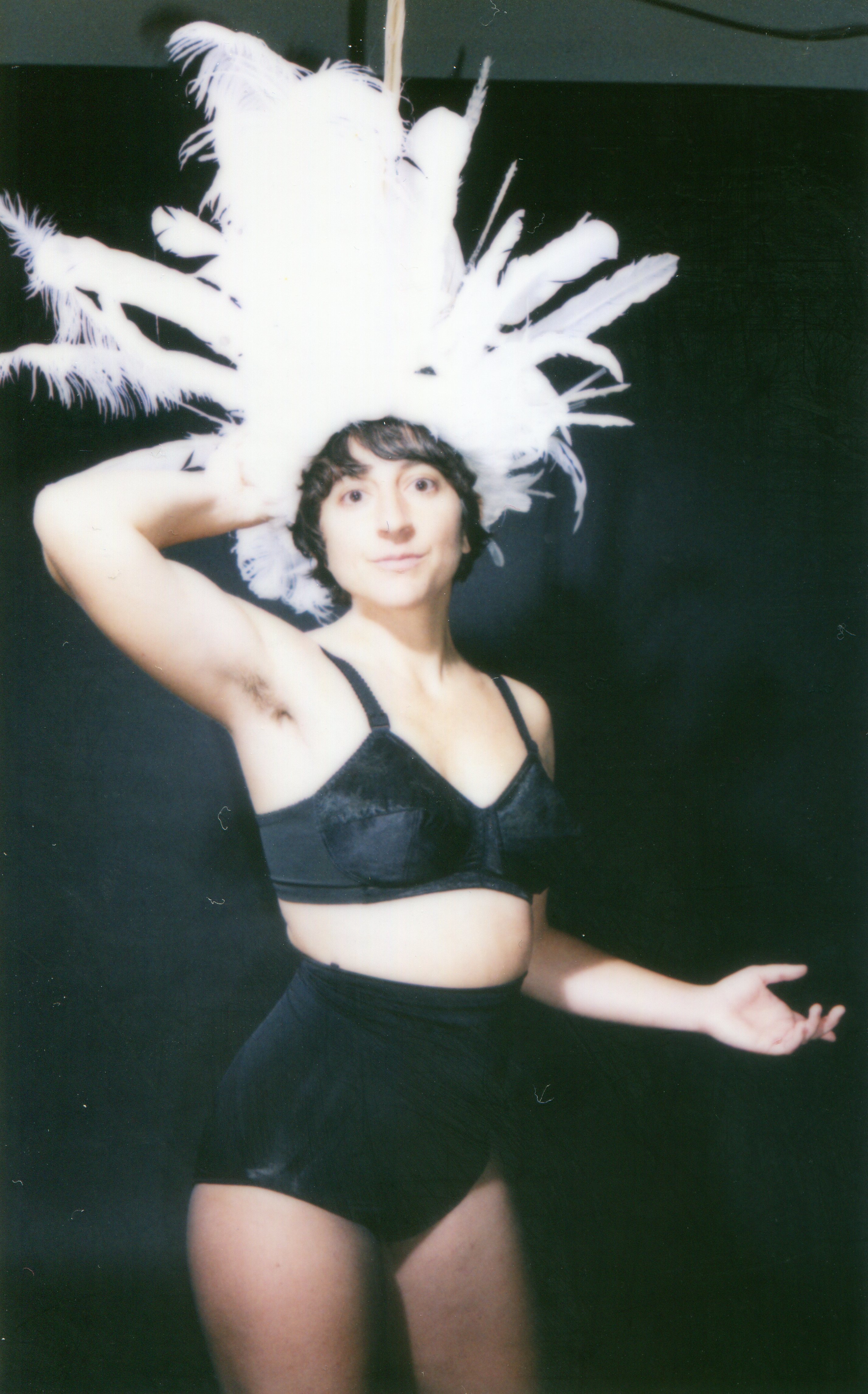 LB: Has there been anything that surprised you in the process of getting to know the character of Cherie Dre, who has these multiple personas? I ask that question in the context of Dad Band, your previous piece which was an embodiment of your father as a character.

SY: That’s a great question. I was trying to get to know my dad with Dad Band and with Cherie Dre I’m trying to get to know my grandmother. But unlike with my dad, having lived with him, his habits and routines, I never really knew my grandmother. I met her as an older person when she was heavily medicated. There’s something about the absence of her that I’m collaborating with, while also trying to collaborate with her fantasies.

In terms of a surprising thing, I can remember that at the Cooley Gallery, when I tried to perform in that installation—there was a moment where I put on this 1950s bra that was very contoured, looked in the mirror, started putting on lipstick and I had a really weird feeling, like, who is that in the mirror? For a split-second I was seeing generations of women in my family and it really freaked me out. It was really powerful.

LB: I remember talking to you at some point about embodying this woman living at a time when there were distinct cultural expectations around who a woman is and what a woman wears. How are you dealing with those expectations of gender and how much are you poking fun at or interrogating them?

SY: That is a big question I’m exploring now with the costume designer. There are these photographs that Jared Buckhiester took of me in the hotel ruins upstate—I had styled myself mostly 50s period-specific with some fantastical elements. When I look at them now, I’m not sure if there is enough complicating of gender going on or if am I just consumed by the femininity. And I’m curious if my real-life discomfort in terms of the way I experience myself in relation to femininity has to do with authentic gender expression or misogyny that’s been passed down. I can’t tell.

Maybe I can ask you a question. How did you end up being a kind of steward of movement, a person inviting movement in?

LB: Eiko & Koma are the artists who were very formative for me in defining what movement is and can be and how it exists in theatrical spaces and gallery spaces. One of the first projects I worked on when I was in my 20s was their Retrospective Project which was looking back on 40 years of their work. I spent a lot of time sifting through old press releases, thinking about their work in relationship to Butoh and other post-war Japanese art forms, watching video, having conversations with Eiko and Koma and their collaborators.

I have a personal interest in thinking about how different performative forms exist in relationship to and in conversation with dance. That intermingling is also in the DNA of Danspace Project and its roots as a place that poets founded for their dancer friends. There’s something spiritual that happens there that different people have different names for, but I’ve heard one artist describe it as a distinct frequency that you feel in your body when you walk in. Which is why it’s so exciting to see, for example, sound artists or musicians there and how they deal with it acoustically.

SY: What’s so amazing about the Church for this particular show is the grandness of the space and the columns. It feels like a grand ballroom. If you just kind of squint your eyes away from the religious men that are in the stained-glass windows you could be in the dining room of the Concord. You know? 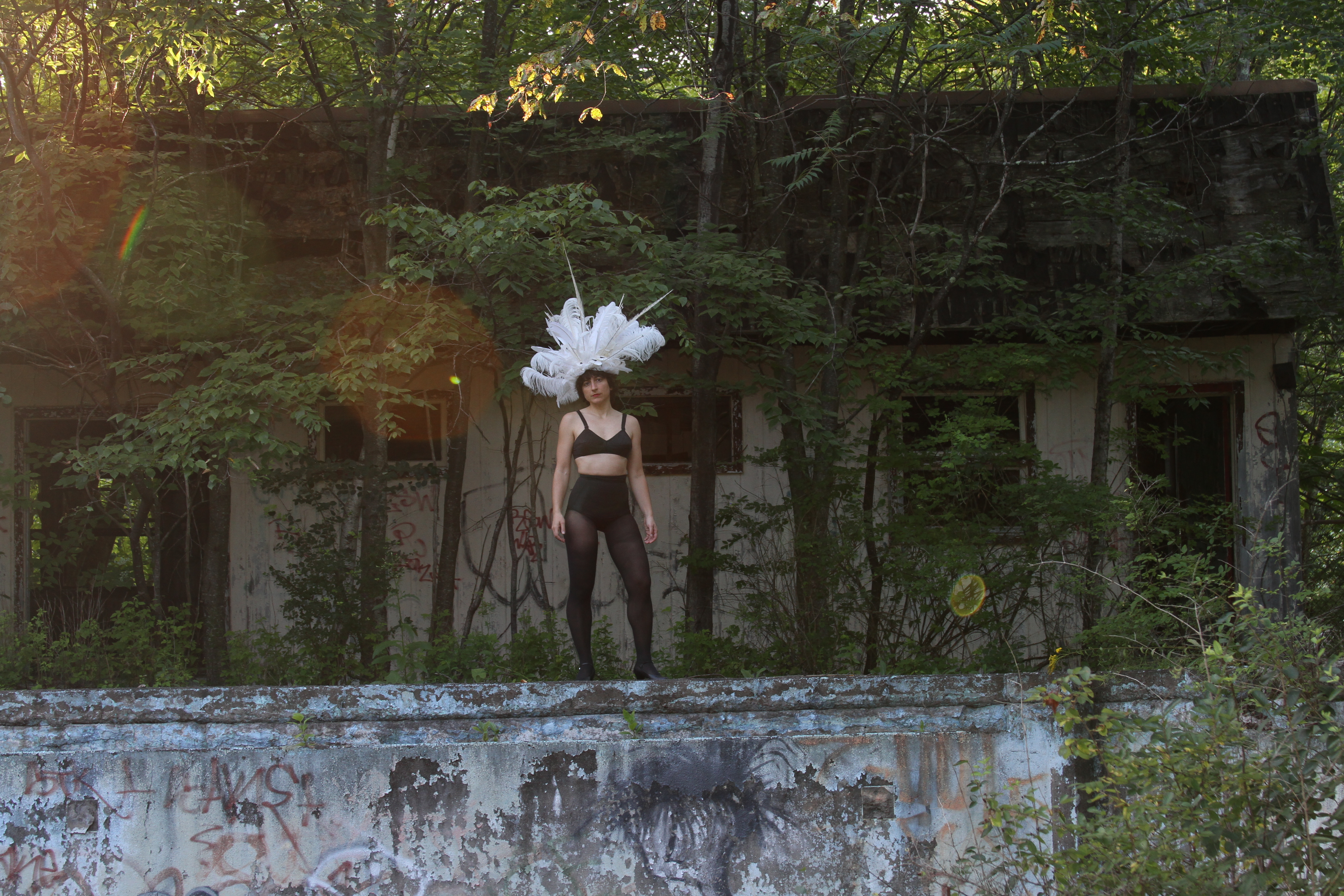 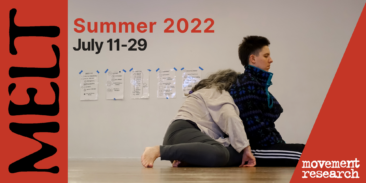 Sacha Yanow is a NYC-based performance artist and actor. Her work has been presented by venues including Joe's Pub, New Museum and Dixon Place in NYC; PICA’s TBA Festival/Cooley Gallery in Portland, O...
Read More

Lydia Bell is an arts administrator and performance curator. She is currently Program Director &amp; Associate Curator at Danspace Project, where she oversees programming, publications, and research i...
Read More