Image courtesy of the author. Portland, OR, August 2017.

ID: a triptych of signs, on the exterior of a dark blue structure, reading "Low" vertically in black letters, "Art" in green neon through a window, and "Buy" in red neon behind the same "Art" green neon.

From the Archives: Some More Thoughts on Capital-D Dance

In 2017 Tara Sheena wrote Some Thoughts On Capital-D Dance. And a year later wrote Some More Thoughts on Capital-D Dance, which we are taking a moment to republish here, at the end of 2020. As we adapt and change to this ever evolving field of dance in the virtual and real worlds, we thought it would be pertinent to reflect on these meditations from "before." Before we a time that has requested we commodify our bodies and ourselves to be consumed from a screen, behind protective glass and a mask, and with at least six feet of distance. All the confines that we have worked so hard over the years to break within the medium, are piled back on. Yet, we still dance.

I sit with my body and I remember -- Dance has not been unkind to me. The thing about Dance is that I talk about Dance like it’s my oldest friend; my most impassioned lover; my overly obedient dog, recently adopted; and/or a mildly annoying step-brother. Familial, considerate, chosen over time, chosen with faith and skepticism in equal measure.

I don’t know how people make Dances even though I participate in that act every week of my 29 years and counting (how the fuck).

This is the part where everyone talks about that Merce Cunningham quote about how Dance doesn’t give you manuscripts or paintings or anything you can sell or hang or re-gift. How there’s devotion and sacrifice and anti-capitalist joy (if there’s such a thing) in every ounce of our steps, our presence. How our raison d'être arises with full understanding that one cannot possess capital gains and abundant humanity all at once. I am purposefully misinterpreting here or, at least, riffing for my own context. 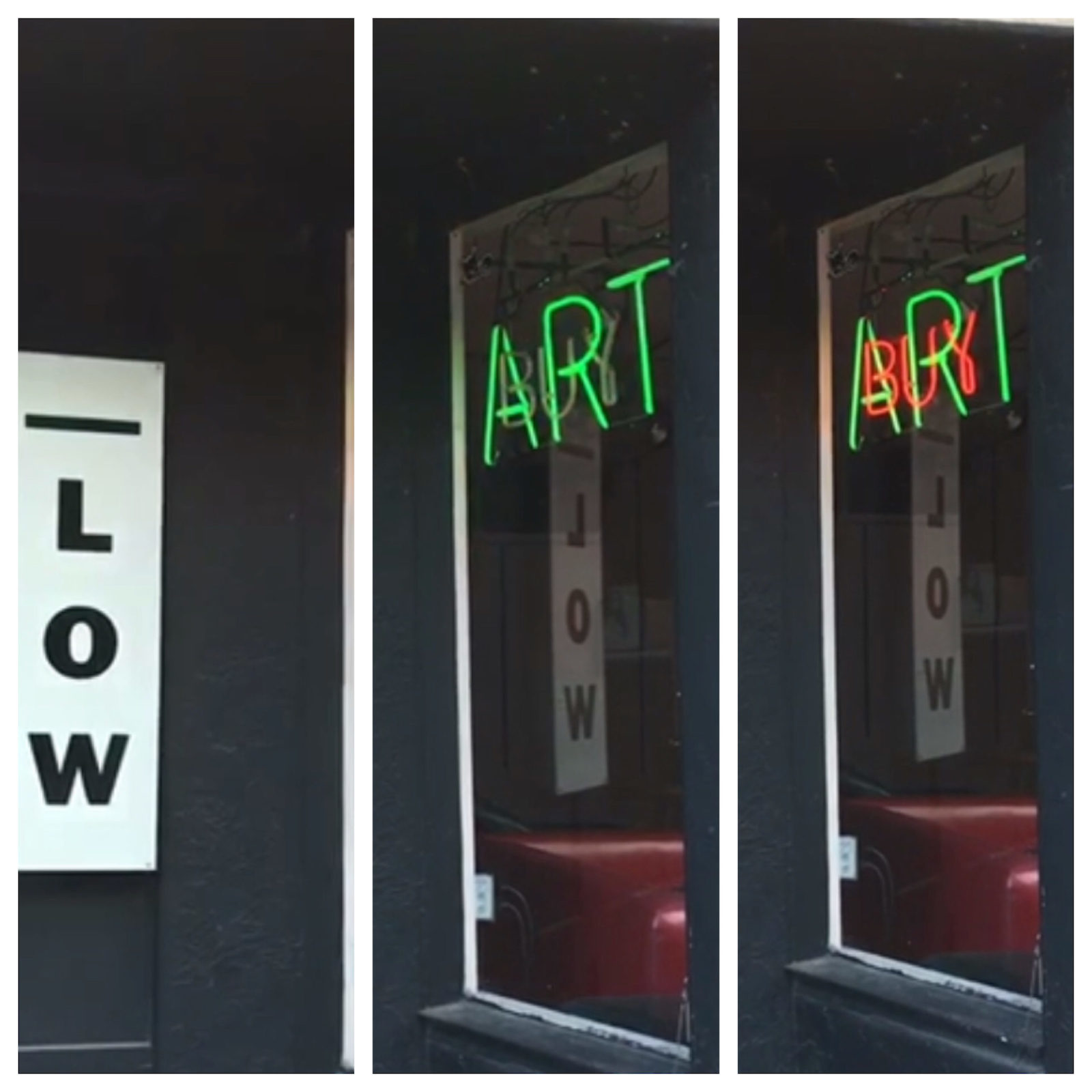 Image courtesy of the author. Portland, OR, August 2017.

ID: a triptych of signs, on the exterior of a dark blue structure, reading "Low" vertically in black letters, "Art" in green neon through a window, and "Buy" in red neon behind the same "Art" green neon.

What dormant-feeling-heart-strings are we tugging at when discussing aliveness, and who gets to feel it? Transience, and who gets forced into it? The past tense of that ephemerality entangles itself with a present tense pain. Fleeting can be like a surprise gift or a soft kiss, but it can also be like fugitivity, the other side of your prized impermanence. One or the other; choose or be chosen.

This writing is an extension of a term I thought worthy of some mental sport in an essay I wrote about a year ago. It’s an extension of a thing I’ve been living for quite some time. Childhood, sure; growing up mixed race in a first generation suburbia that pretended otherwise, eager for after-school activities and social order. Commitment, drive, agility, and all of those things you’ve heard in a Gatorade commercial as my thesis. The central planet creating a moon orbit that adheres to buying and selling a hegemonic dream, nearly drowning in its own act of white-knuckling bureaucracy. Stick to the script. Now, when I Google Capital-D Dance, it’s a different story. I am suddenly living an American dream I likely inherited long ago without trying to: inside a power of my own making while unaware of its exact boundaries or implications or even how to decide such a thing. Language creates and muffles a truth, again. I think it’s that deep. Language kidnaps your make believe and begrudgingly returns it as data or analytics or search terms or whatever. That web page is a marker of some thought experiment that I started before I quite knew why. A marker of some thought I am still thinking.

Maybe you could try it in the form of really disarming spoken word poetry, meets post-Coltrane free jazz, meets Bob Fosse out to lunch with Dustin Hoffman, meets the first three exercises in a Graham class, meets not trying to be John Cage so you end up being John Cage, meets the fact that my boyfriend hated that movie about Bobbi Jene Smith, meets a Balanchine ballet as a farm-to-table restaurant, meets backstage at P.S. 122 in 1993, meets a wide fourth position a la Sarah Michelson (not Batsheva, note the difference), meets your Pilates certification, meets your fake Pilates certification, meets wondering if Anne Teresa and Beyoncé could ever just meet for tacos, meets self-diagnosing your injuries, meets Manic Pixie Dream Girl but gender nonconforming, meets non-Philip-Glass-Philip-Glass, meets forgetting that you met someone on the Internet when you meet IRL, meets your horrible yearbook photo from 7th grade where you tried and failed to be Gilda Radner, meets monolithic thinking, meets that one Trisha Brown thing everyone does, meets New York Fashion Week (but, like, on Instagram), meets a shopping list in the style of a tweet by Lin-Manuel Miranda, meets the lunch break of the union carpenters at Carnegie Hall, meets the debit card you had to cancel because it fell out of your bag on the F train, meets overused tropes in YA fiction, meets a pair of Dansko clogs, meets a follow-up email demanding late payment, meets that one time Björk showed up unannounced to the Movement Research Gala in all white (dash of yellow).

Have you checked in with Dance lately? It’s engaged with Economy, sure, but in ways that make you flinch or perk up, depending. Economy as philosophical conceit or additive identifier are not the waters I am treading here. Economy as resource that can be held, discussed, coveted, conflicted - yes. Have you checked? There are no terms, no limits, no loans, no debts, no barters, no costs that don’t come at a cost to bodies. Physical, hungry, alive, solvent bodies. There it is again: the striving, the problem of my own making.

But, it’s a choreographic exercise. It’s a thought. It’s my own moon orbit, which got in the way of yours, sorry about that. It’s the Kickstarter campaign, the patriarchy, the overdue library book. It’s the text message in the category of non-work related activity. It’s the Dansko clogs, again. It’s that single fleeting moment where you feel alive. It’s something you’ve done before. It’s that one time Tommy DeFrantz told us a relationship to capital is a relationship to whiteness; or wealth or resources or, I do think I am mincing words, but I think you get it. It’s another hour on the train. It’s a simple thing you should never stop thinking about. It’s my body, next to yours, at the same time.

How do we engage with the means of something as it exists outside of the promise of capital? I have seen Dance try, but it fails. It’s ok, though. It’s supposed to. 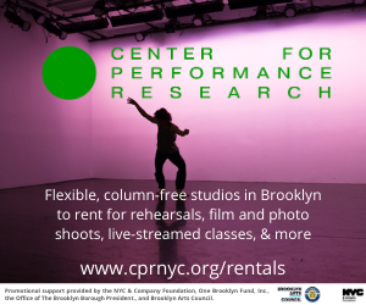 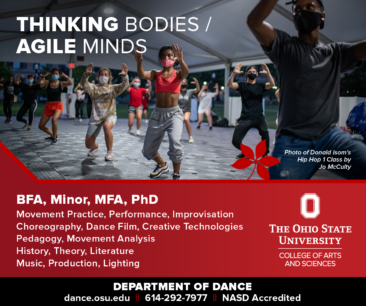