From The Archives: Randy Martin and Performing the Changing City

Do we want that public back?

This question posed by Randy Martin almost 8 years ago gains significant resonance today as we are tempted to yearn for the pre-pandemic public. A temptation that is hard to resist when all we have been staring at are the walls of our apartments. However, Randy reminds us that the very notion of the public is problematic, if not foundational to the neoliberal economic imperative itself.

Rest in peace, Randy. Your words will always be with us.

The following text is a transcribed portion of Randy Martin speaking on his concept of "the social kinesthetic" at the Movement Research Studies Project, Performing the Changing City: Public Space, Transformative Events and Creative Action in New York, which took place at the Hemispheric Institute of Performance and Politics on March 19, 2013.

Click here to watch Randy's portion of the talk.

When I was a younger child than I am now, I remember growing up with these publics. There was public school, and there were public parks, and there was public transportation, and I went to this thing called the public university, and I came out and I actually didn't have debt. So, obviously, there were dinosaurs roaming around, and cockroaches—a strange unfamiliar world. And I wound up here, teaching public art to freshmen who likely will be in debt. That's something that happens at the Tisch School. The students come in and there's this sense that their own personal and private investments in their artistic craft will not be sufficient in a world that's often hostile to the arts. They're going to have to learn to get a public voice and become public intellectuals on behalf of the arts.

So, that is to say that I’m stitched in to this line of publics. I just want to pause and worry what that line might be because it seems that there's no doubt that from so many perspectives the public that we once knew has gone missing. It is like the sand castle; every time the wave goes up there seems to be a little less of it. I think in some ways, we're at a kind of crossroads or a crucible where we could ask, Do we want that public back? And certainly, as Abby [Levine] was suggesting, when we think about what that public was, it was not all it has cracked up to be—it was full of exclusions. If we're talking about the Greek version of the public, you had to be a male, a property owner. And it wasn't the 1%, it was the 5 %, but things haven't moved that much. If we’re talking about Victorian public and private, obviously there were all kinds of issues of what was valued and what was not. 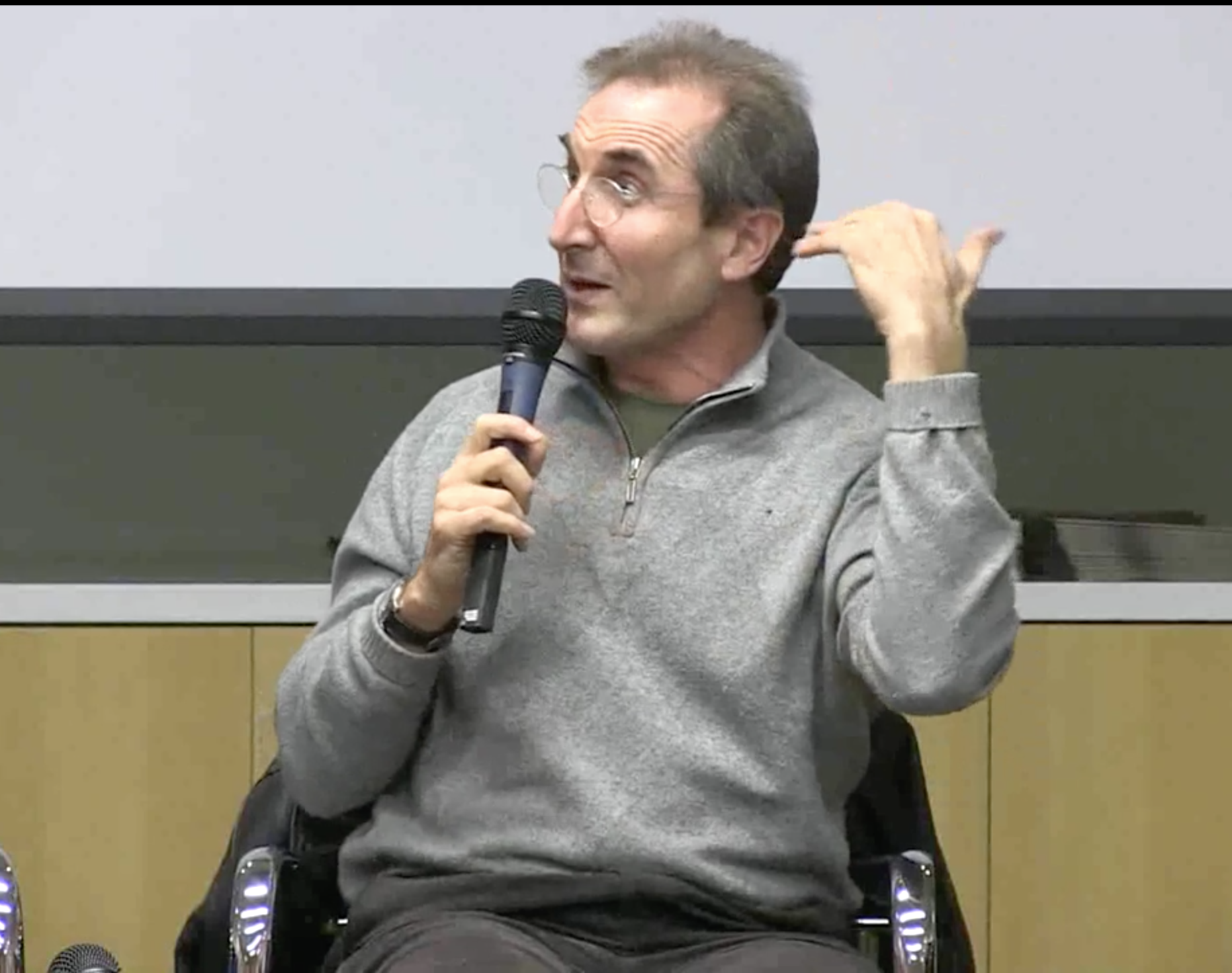 Video still of Randy Martin speaking from the Hemispheric Institute.

I think it's important to appreciate that the Western conception of art enters right into that divide, the gendered idea of the private realm as issuing the aesthetic, as issuing this virginal domain where value is going to be pure and restitutive. This is part of a troubled legacy that artists continue to live through in the form of not giving comparable wages for comparable work. So, there’s a lot to worry about with this public. But when we think about the other aspect of a strategy, of a politics around reclaiming “the public,” we also have to worry about what happens to that divide between public and private. If we’re valuing a form of public art and if we’re talking about New York City, the history of that public art is the history of state representations of what the people should follow, heroes on horses, of organizational forms, like non-profits, in which public coffers get evacuated through tax exemption and artists are invited to think of themselves as corporations.

The very language that we’ve had to think about the public has been itself something of a Trojan horse where what’s inside the horse is not simply the private or the market or that truth, but a difficulty in sustaining and supporting that very notion of what the public might be. That boundary between the private and the public is itself part of the problem. Because it sorts out what can be valued, what we should unify around, and those claims to unity have this troubled history where some particular type of person or place or position was meant to stand in for everyone and that’s part of the freighting of the public. What else might we look towards if we’re noticing that there’s an expansion in our midst? The relationship between the public and the private continues to have all kind of tactical value; there are all kinds of worth and capacity there. But maybe that particular framework or naming what it is we want more of is going to put us in the paradoxical situation of gaining us less.

It seems to me that one alternative to that partition of public and private would be to consider “the social” as a term that is not necessarily based on that particular cut between what gets to appear and what's rendered invisible. And it's striking to me that many of the most interesting interventions in politics and the arts have straddled some version of public and private. Certainly, Zucotti Park would have been unimaginable if it wasn't in that liminal condition of being a formerly public-private entity that couldn't be exactly shut down at midnight and had a charter with the city. But that perverse relationship of using government and public authority to vest particular capacities in private entities is more or less the extending formula that we have for meeting what are now called public goods.

We should even remember that that notion of public good started off amongst economists coming out of the 1930s and the idea that gave birth to something that’s now called neoliberalism. That public goods were things that did not lend themselves to the market because many people could use them at the same time without using them up. They were non-rival. It was difficult to keep somebody away form their use and there weren’t additional costs involved the more people that used them. So, those were known as the condition of being non-rival and non-excludable.

But that pristine state of the public good into which knowledge and art were supposed to fall, that was very much the basis in 1965 for a Rockefeller Brothers report that justified the need for public funding of the arts in the form of the National Endowment for the Arts. That became precisely the basis for extending markets, intellectual property, the capture of that which previously didn’t have a price, that didn’t have a value—the privatization of education, the transference of education, which was seen as something that was important for civic and national purposes, into something that was an investment to add value to an individual’s earning power. When we visit the terminology that we have, whether it’s economic, organizational, cultural, aesthetic, that divide becomes a problem. When we look at the ways in which artists and activists have begun to re-craft space in the city we see that in many ways it is precisely in the crevices in which something else is being emitted, in what would have been a boundary or a barricade between the public and the private. 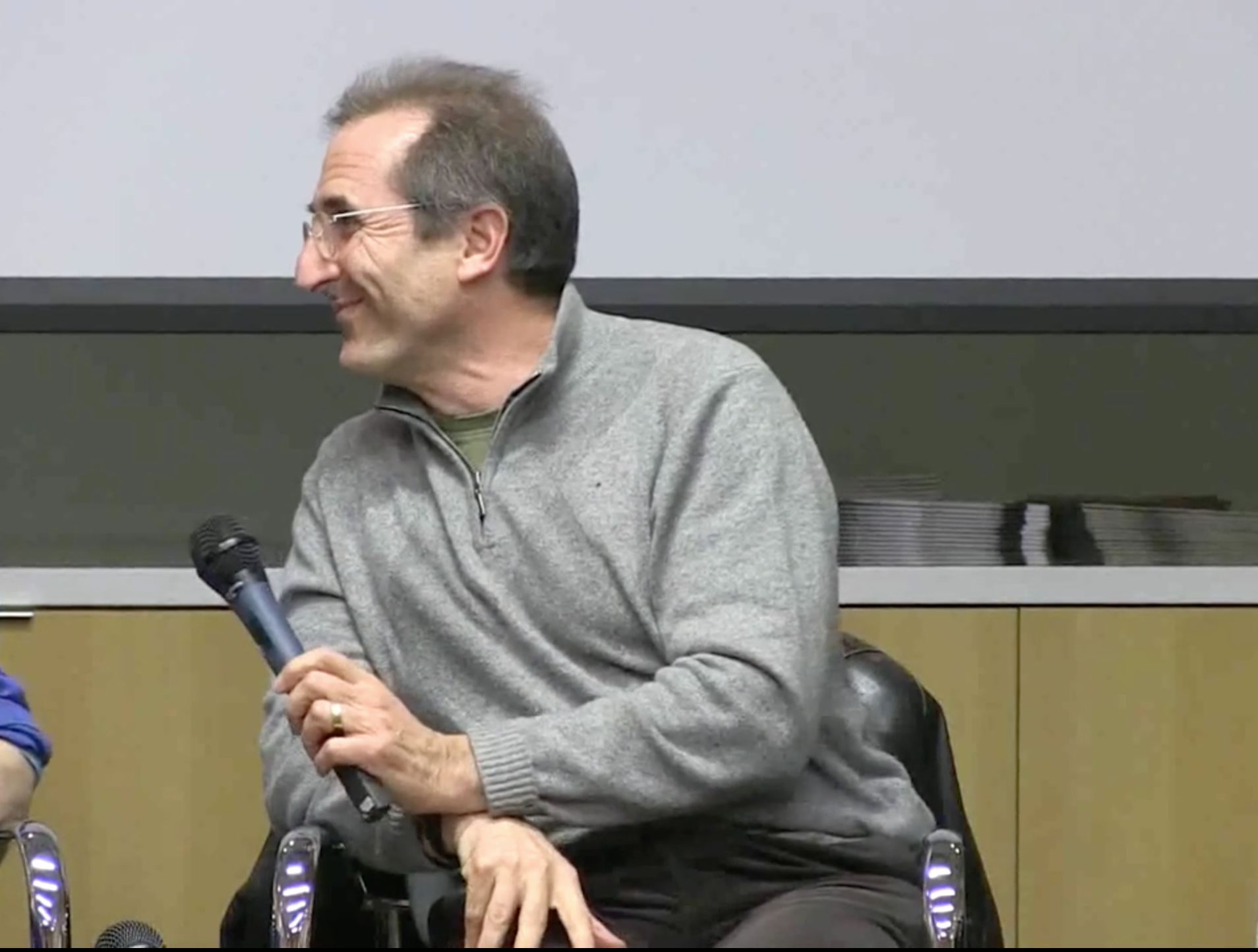 Randy Martin smiling at a panelist. Video still from the Hemispheric Institute.

I think it’s interesting to consider if this is auguring not a turn to the past, to try and get back our public that we've lost back, and with it having to negotiate who the “we” was, and what that past was, and what the point of reference was. If we’re talking about orienting ourselves to the future, which was part of the framing of the panel, then I want to also inquire what's happened to the future?

The future once was also safely locked away from the past and the present, and if anything we’ve seen that now the future's come crashing upon us. We’re asked to live out all of these different risk-management strategies. Whether it’s in terms of preemptive wars on terror, strategies to try and trade carbon or pollution credits, or strategies for trading on the stock market. I think if we think about what has taken over the city in the last forty years it’s very much been the financial sector whose mantra is to make the future actionable in the present.

That’s what derivatives are meant to do. Derivatives are incredible phenomena where some small aspect or attribute of some underlying value, like the interest rates on a mortgage or the likelihood of default on a mortgage or currency exchange, get traded in order to anticipate risks. And the total value of those derivative contracts is about a quadrillion and a half dollars, which is about fifteen times what the world’s gross domestic product is. Now we can stop and say, Uh oh, something unreal, something epiphenomenal, something ethereal, something immoral—because it is immaterial—has taken over our lives. But we might want to pause and say, But wait a second, isn’t that exactly how people talk about art? Something that is ethereal, epiphenomenal, something that isn’t grounded in the material? Certainly those are not people who do art—who labor tirelessly without wages—who think that the effort stops when the performance is over and it becomes ephemeral and ethereal and disappears—when in fact you just continue working.

Part of what’s at stake in this future coming at us is, What does it mean to take the practices of risk that are so familiar in the arts and to introduce a different kind of currency? If the future is upon us. If we can make small interventions. If the logic of a derivative is what's called arbitrage. If you look at the small differences in a space that seems to be closing and you move right into that space. Now that reminds me of contact improvisation, but it also reminds me of skateboarding and other kinds of movement practices moving through and etching out certain kinds of openings and closures in the city. We might say that this is, indeed, a kind of mapping of a different way of valuing risk that acts on what could be and begins to announce what I would term a "social kinesthetic," a sensibility for how it is that we move together, that we're oriented towards movement that we could say is a way of reclaiming and reinvesting in a different principle, a lateral, distributed, but also difficult-to-concretize principle of people moving together but not as one.