[ID: Dancers in Central Park lying in the grass at the end of a freeskewl class with Kyle Marshall in June 2021. A baseball diamond, tall buildings and a bright blue sky are in the background. The dancers form a large circle.]

In 2014, I inherited a role co-organizing a roving class series called CLASSCLASSCLASS. It programmed experimental movement classes by dancers trying to grow their teaching practices at several DIY and institutional spaces around New York City. This process of inheritance was as tricky as it was beautiful. It involved community uplift, a sense of possibility, and it allowed CLASSCLASSCLASS to shapeshift just enough to survive.

One way I see this survival is through the creation of other dance class platforms. We need practice and we need to practice together. Which is why freeskewl was started—forged through the pandemic to keep us moving in community. Each of these class programs danced on the shoulders of others who came before. It’s rare that we know who we’re indebted to (or better yet, whose work lets us expand). This conversation is one small effort to put some cultural dance partners together in conversation.

This conversation has been edited for the purpose of publication.

James Kidd: I am really curious about the timing of freeskewl. I was wondering if it was an idea that had surfaced before the pandemic hit or if it was an immediate response to [the pandemic].

Em Papineau: It really was an immediate response. I think we (Anna Maynard, Sofia, and I) lived in the same building at that time. And we were just hanging out and we were like, “what are we going to do?”

Sofia Engelman: At the time, virtual classes didn’t even exist.

EP: But we were like, “Let's just, let's start something.” Between the three of us, our dance community is pretty broad, so we can get some people in and see how it works and if we could do this. And then we worked for like, 70 hours that week, and then we launched it.

SE: But definitely, I think we were creating something that was so of-that-moment and so reactionary really, to financial needs and [to] this large cultural recalibration that was happening at the time, and what institutions were or weren't giving to the community. So the way we set it up was something we could maintain in that exact moment, but didn't really have much sustainability… We were all unemployed at that time, so we were able to put time in that wouldn't have happened in any other situation.

I'm just really curious about the stamina of this kind of thing and these questions around curation, and like, “why am I the one holding this?” that I feel inevitably comes up.

JK: Are those questions that you are asking yourself, and/or people were asking you? Like, “why are you doing this?”

SE: To me it felt like we sort of found ourselves in a situation where we were fulfilling huge needs that people were having in a way that no one else could at that exact moment. People were really eager for it to keep happening.

JK: I mean, I think it's important to have other voices inside of these structures that are fulfilling something that Tara Jane, my wife, and I have been talking a lot about. What we're calling the “underground” but it might not be called the underground..?

I don't love the terminology “do-it-yourself” because these things are not do-it-yourself. It's do-it-with-other-people. And maybe there’s a more apt terminology, because you're not actually able to do them alone, which I think in itself is an inherently anti-capitalist model. Yet, we're using this language that is just about an individual. We've just been using terminology like “underground” and asking questions about why it's actually important. Like, why could we live in this time and not have an underground? What would that look like? Would it be really boring? Is the underground something that is just part of this particular era or culture that we are participating in or not? And I forgot how I got here in the first place.

Anna Sperber: I think that they brought up the idea of sustainability.

AS: So that's where passing on… the labor of it, becomes important. When I have been involved in different initiatives or projects like this I always am fed a lot and in multiple ways. And I find that other people's energy gets me excited and it's like a whirlpool. That generates a lot of different positive things. But also, it's a lot of labor and time and work as well. And yeah, in relation to being in a capitalist ecosystem, there isn't a ton of compensation in that way. 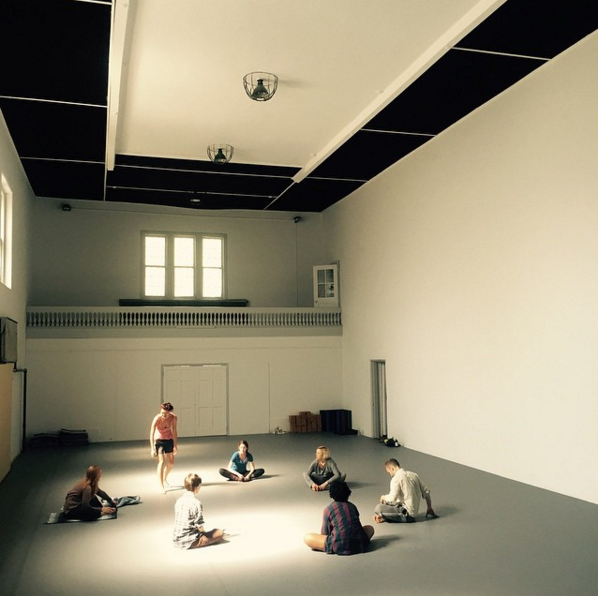 [ID: Seven people are arranged in a circle, in a room with bright light coming through the windows. Six of them are seated.]

JK: The name of your program, “free school.”

SE: Yeah, it was interesting—that name. Well, that name came from Anna Maynard. I think it was coming from a utopic wish for a school that was free. And then making everything sliding scale and…

EP: And a scale starting at zero.

SE: No one turned away. Having that possibility within it while still giving people and artists the compensation that they deserved. Yeah, it was a big driving factor. And we were starting in this moment where a lot of artists were feeling very frustrated and speaking out about how institutions were handling pandemic cancellations and payment.

EP: And contracts being broken…

SE: And trying to be this net to hold possibility around that.

EP: And also, there was something beautiful about the whole sliding scale. Because it really puts the responsibility on the class taker to truly look at their financial situation and their privilege. And I think at one point, or from the beginning, we had a whole list of things for people to consider when paying for class, like, generational wealth? Are you living at home?

SE: Yeah, and then that turned around toward the teachers when our reparations initiative began. Then these questions were being asked to white instructors about what percentage of their pay they should be contributing into this fund that was then being divided between Black, brown, and indigenous facilitators who were opting in to receive that extra support. That was such a big part of how we were guiding ourselves. But that left very little compensation for ourselves and for administrative labor.

We got to a point where, in order to figure out a way to compensate ourselves properly, we'd have to institutionalize. We'd have to either go deeper into an institution that could house us or we would have to become an institution or find large donors, or whatever. That step just didn't feel like what we were doing.

And that step also felt necessary if we were to hand it to someone else. And I think especially in this climate of artists being empowered around expecting livable, thrivable compensation—which is so important and an amazing cultural shift—it didn't feel appropriate to ask unpaid labor of anybody else. 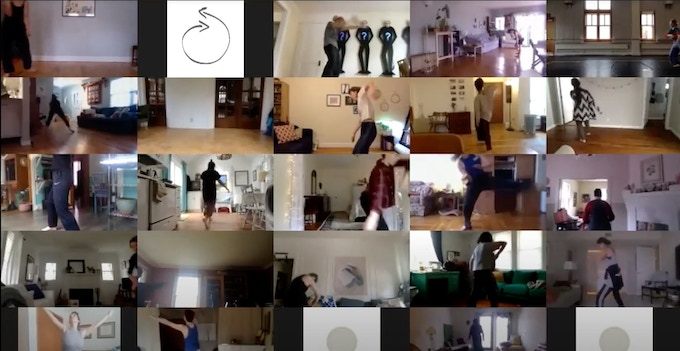 AS: This sustainability thing is interesting, because I think that that's why we passed it on. I mean, it was exciting to be a part of. It was filling and exciting and meaningful.

But I also had all this other work that I was focused on. And it was a lot of work just like anything that is ambitious in scope. I had a studio in Bushwick called BRAZIL from 2005-2014. We had student classes there and other places. I don't remember if I was a parent by then, but I think there were a lot of things that were starting. And so we'd love to pass it on. And I feel like part of Jmy, your legacy, of…

AS: No! Starting things and realizing them and making them happen and putting a lot of work and action into them, and then trusting other people to carry them on in the way that they will.

I think CLASSCLASSCLASS was your idea, originally, and you approached me. I remember that Jmy approached me after I was subbing for Juliette Mapp at MR one day, and Jmy was in the class. I actually have a very vivid memory of this. Anyway, Jmy brought up this idea after that.

JK: Because I loved your class so much!

AS: Well, and I think it was like, thinking about the different things that different people had to offer. And certain people were in heavy rotation (and for good reason, you know). I also think it's interesting, because MR also, I'm sure served that role as an alternative place for teachers in class early-on too and probably tries to maintain that.

JK: I love taking classes because I love seeing… I love dancing with people. And I love the sometimes randomness of it—just who was there, you know, it wasn't like a rehearsal where it's designated. And also just the space to practice in a different way that wasn't practicing for a performance, just working with information. 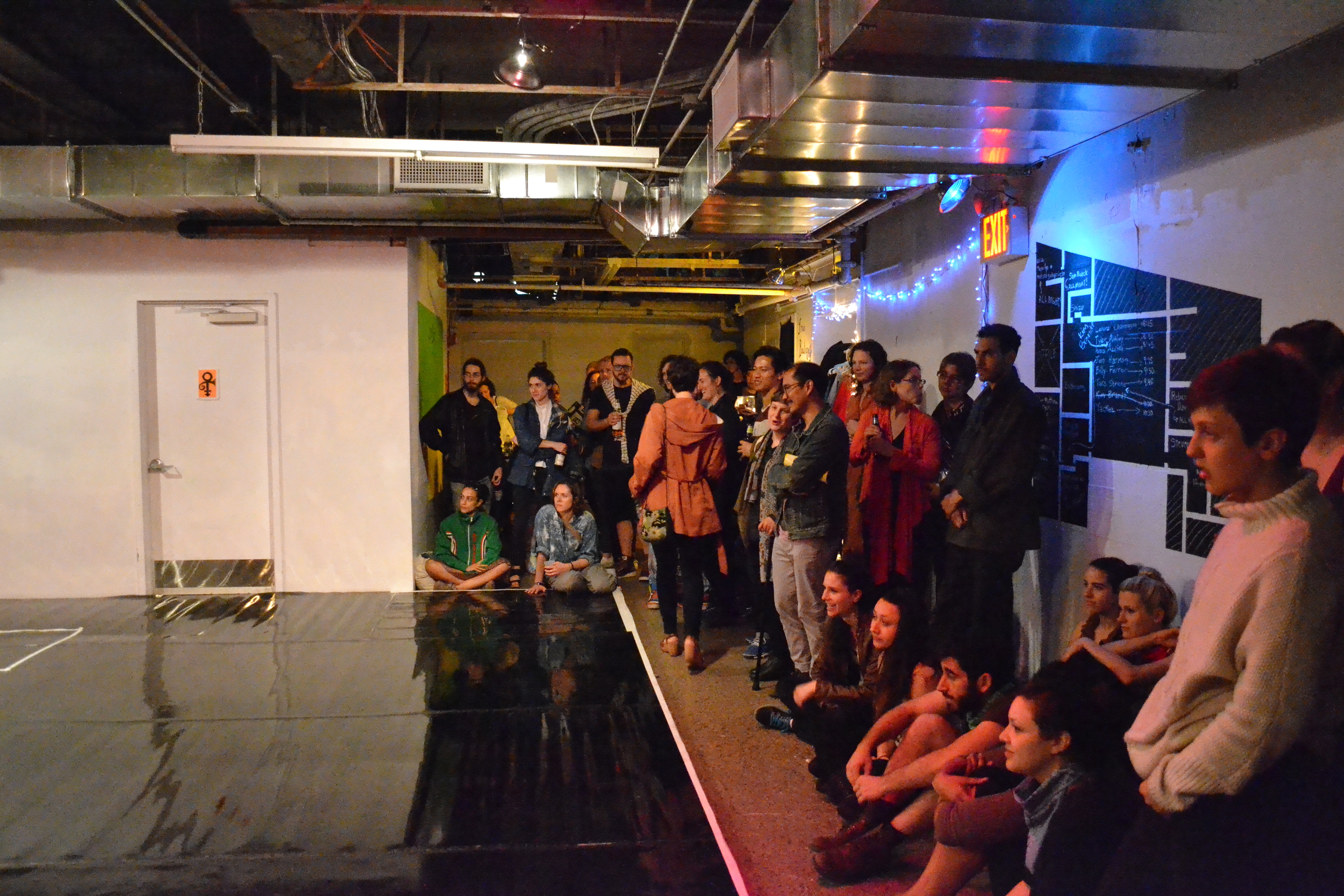 [ID: A group of attentive audience members sit and stand to the right side of a marley floor.]

AS: Did you guys—how did you do? How was it? What's the last word on where, where freeskewl is?

EP: Well, we haven't had a conversation yet. Not even with the community. Yeah, the answer is: We have no idea. We're on a pause right now.

AS: It's still such a weird in-between time right now. Yeah, classes are happening, but I'm not really going to classes. I mean, I teach here and there, but I used to go to yoga classes or even other kinds of in-person group improv classes. I haven't started to go back yet. I think I could. Anyway, that’s a whole other conversation, but it's related.

JK: Well, I do think that we're in a moment. And we have been hovering here for a while, even before the pandemic, where structures need to… structures and institutions need to… They are crumbling and need to go away. And new ones are not built yet.

SE: I felt like by nature, because everyone was having to question what they had been teaching—figure out what was at the root of it—to be able to make a virtual version. And sometimes, you know, the root of class had nothing to do with doing a phrase at the end. [Maybe] what was at the root was finding that togetherness. People were really reassessing. There was just some beautiful experimentation happening.

And I remember, especially in the thick of it, I remember we would make these weekly class schedule graphics and people were getting really into their class titles. Like every class title was like, three lines long.

EP: From the beginning. I think one person was like, “lying in the mud of blah, blah.” If you weren't a dancer or an artist and you just saw it on Instagram, you'd be like, “What the hell? What is going on?” And then it just…that became a big part of the norm, making this bizarre title that, to some, made a ton of sense. But it also was, like, 14 words.

JK: There can be an aspect to class, dance class, not all dance classes… that a person can go and try it out, and see what's happening. There's a sort of openness in a class that isn't necessarily inside of a rehearsal or company or something like that.