2012—My Year in Dance or: A Farewell/Comeback Tour by Clarinda Mac Low

Clarinda Mac Low reflects on her identity as a dance artist in the first of a series of several writings for CC in 2012, which she has dubbed “The Year of Dance.” Mac Low will be performing on Friday, May 18, 2012 at Danspace Project as part of a Food For Thought evening curated by Heloise Darcq.

Thumbnail photo by Dona Ann McAdams ("Silence and Other Reformations" at PS 122, 1990.)

Back in September 2011, Lydia asked me, “Not calling yourself a dance artist anymore—what’s that about?”

The first thing that comes to mind in answer to that question is another question: What is a dance artist?

Let’s leave that alone for a minute and go on a trip down memory lane.

For as long as I can remember, the urge to move, move, move, move for the sake of moving, move in a non-functional manner, move with music, move alone and with others, move in organized formations, move freely, move with intention, but above all MOVE has been strong.   When I was younger, it was overwhelming. It was one of the few clear directions in a very blurry life. Emotional overload and constant worry, fear of failure and lack of self-esteem—the common companions of a tumultuous upbringing—all fell away for a moment when I was dancing. And I was always dancing, from the time I could walk. I danced with myself, I danced for other people, I danced in clubs and at school dances and in the living room.   I danced, and I was praised for my dancing. 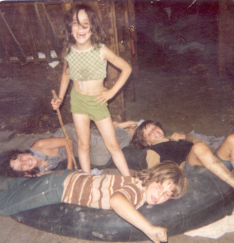 Clarinda Mac Low is her first piece ever, Farmington, ME, ca. 1974. Photographer unknown.

And yet—I’ve never felt comfortable calling myself a dancer.   When I started studying dance rather than “just” dancing, I was in for a rude shock—apparently, in this venue, I wasn’t much good.

Recently I started taking “technique” classes again, to keep my brain flexible, and I had a moment of insight—the main problem I have with technical classes is that it takes me a really long time to learn movement.   This has probably been the main reason that I haven’t ever really felt comfortable calling myself a dancer.   To me, this superpower of instant movement memory (and it is an extraordinary ability) was what defined a dancer.   And I don’t have it.

However, improvisation turned out to be absolutely my forte. Instant composition came easily, and so did the more prolonged version. Making dances, or, more accurately performances based around dancing, became my passion. I added a dance major to my already demanding biochemistry major, and the rest is… 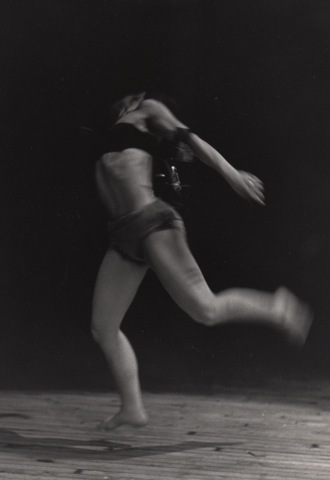 But wait. Isn’t that dance?

So eventually (aka ca. 1999) I gave up. I accepted that I was something different. I moved on

I thought I was no longer in dance, and a very kind grants administrator who was familiar with my work even told me that I should try applying for grants in perform-ance art instead of perform-ing art. (It worked.) I tried directing theater, I decided I was a conceptual performance artist, I started investigating the visual arts world. I gave up on labels.

But a funny thing happened.   I gave up on dance, but my particular dance world didn’t give up on me. Somehow, I kept being pulled back in. Resources and commissions appeared periodically.   I got attracted to opportunities. I remained attached to people. I had thrown myself full-heartedly into the dance world, and, even when I was backing away, the dance world kept me in its heart. I kept hanging around, which may have made it seem like I was still there, but how could I not? People I loved, artists I respected, work I learned from, and, often, ideas that moved me were all still there, in the dance world.

How I think about all this since Lydia first asked me that question has changed, and the question is part of why my thinking has changed.   In considering her question, I had to stop and take stock. To my surprise, when I thought back on the past 10 years, I realized that dance organizations had been playing a strong role in my work, even when I thought I had stopped making “dance.” Mostly through individual champions, but certainly there I was, in dance. I didn’t fit, and I’m sure a lot of people were mystified by how the work came to be in a dance venue, but still. In some way, dance still thought of me as one of its own, and for this I am grateful. 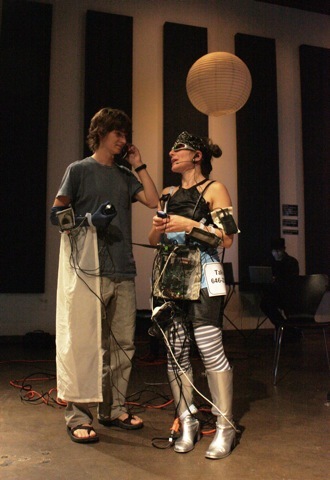 I mean, why shouldn’t dance think of me as one of its own?   I am a dance artist. I am also a performance artist, a designer, an artist who works in social practice, a video artist, a composer and a writer. I will use anything and everything I can to get the point across, whatever the point is for a particular work of art. But always and forever, the body in the world and the sheer joy of physical presence will be part of whatever I make.   And this, I aver, is dance.

Epilogue:   Lydia’s question started a ball rolling for me—the world started handing me dance left and right, and I’ve decided to say yes to it all.   I’ve decided to make 2012 my year of tribute to my dance world.   After I decided this I realized that 2012 marks my 25th year of being back in New York City and living as a professional artist, so this will be my 25th anniversary year—my farewell/comeback tour.

Still from "TRIBUTE" at Roulette, 2012. Video shot by Mike Taylor.