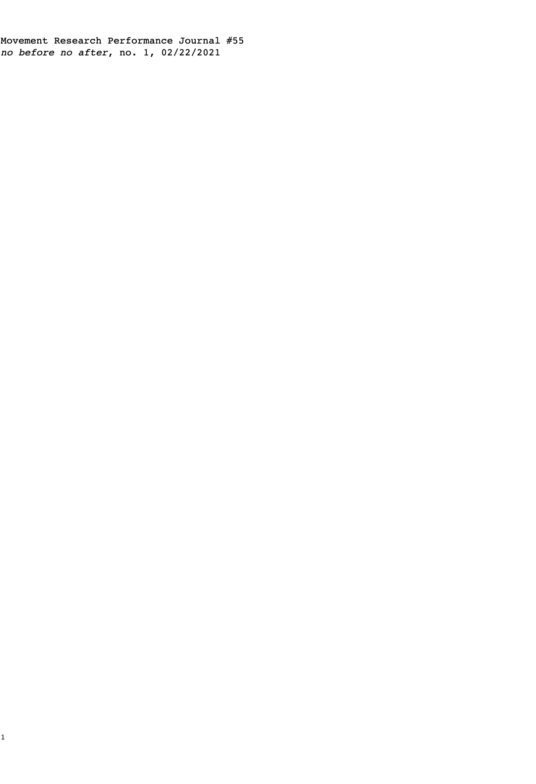 How can we make a journal dedicated to dance and performance in the absence of venues for public gathering, in the shift of stages from the actual to the virtual, and in the failure of the institutions that make the field of dance possible? Or, how could we ever have performed under those conditions and institutions in the first place? If things aren’t working now, were they working before?

Issue #55 of the Movement Research Performance Journal will be dedicated to the mourning and rage of artists and others who refuse to return to “normal” or to agree that what we’re experiencing now is an exception from which we can return. We are framing this work as no before no after, inviting contributors to map temporalities that resist progressive or linear logics, as well as to embrace decomposition, decay, and the repair made possible in coming undone. In Spring 2021, Issue #55 will be released in its standard form, looking like another MRPJ with a roster of contributors drawn from in and around the field of dance, performance and beyond.

Anticipating the inevitability of reopenings, we have asked (and are asking) contributors to be in the loss with us and are allowing their works to drift into the issue at their own time and pace. no before no after we will be released online as fragments of a project that is slowly coming together, congealing over the long duration of a year without live performance. Download the first round of submissions by clicking here.

Examining his own discovery of punk from within the normative landscape of a Northern Virginia suburb, Allen guides the reader through a lyrical description of movements and moshing juxtapositions. "Explain Totality (version 8)" recounts the artist's latest installment in a series of performances in which Allen explores the evolution of punk genres, and the geographical and social contexts that shape its sound and performance.

It could be theorized that blackness is that experience constituted by a naturalized lack of plot, history, and the ontological fortitude those things convey. This formulation is broached in “Architecture of Memory," where artist Brittany Engel-Adams uses digital art techniques in order to (re)member ancestral performances. By (re)presenting the gestures that were her own necessary precondition, (i.e.those of her relatives) the artist forms a togetherness that transcends the self as a discreetly positioned thing in space-time and (re)supposes a possibility of experience both contingent upon and in excess to the phenomenal and causal.

Hamilton details her experience creating "DBIPOCUnfragmented," a network to connect and document the art of disabled BIPOC artists, as both a personal creative act and a community building action.

Returning to her performance GO FORTH, a project that borrows its structure from the Egyptian Book of the Dead, Schaal reflects on architectures of performance and mourning under the arrested conditions of gathering today. A newly authored introduction leads into an excerpt from the GO FORTH script, a vignette titled "The Opening of the Mouth."

Building on his article "THE MALE GAYZE: a film transcript" (published in MRPJ #4, 1991), Waters offers a postscript to his original examination of the fetishization of the Black male dancing body. Layering past and present selves, he collages his own experience, across time, of the performativity of identity in relation to an evolving understanding of how an examination of race and desire have played out across his work.